Moxibustion is another Traditional Chinese Medicine healing technique that has been used for many years. Moxibustion, commonly shortened to moxa, is the burning of a small, spongy herb called mugwort to produce a therapeutic effect. Moxa is moving due to its warming effect, so it is often used to stimulate the flow of qi, strengthen the blood, and promote general wellness. It can also be used to treat cold diseases by warming the body and dispelling the cold, which is especially useful in New England where we are exposed to cold weather for many months each year.

There are two ways of using moxibustion – directly and indirectly.

Non-scarring moxibustion can also use cones of moxa placed on the skin, but it is removed when it becomes hot but before it can cause burns to the skin. Oftentimes, the cone of moxa is placed on top of a slice of ginger or garlic (both of which are warm substances than enhance the effectiveness of treatment), and the whole thing can be removed when it becomes too warm for the patient. Although there is always a risk of burns and scars with moxibustion, that is not the goal of non-scarring moxibustion.

Indirect moxibustion is more popular in the United States, and it can be performed in several ways as well. Stick or pole moxa is made of mugwort that has been more finely ground and wrapped up to form a pole or stick. The acupuncturist typically holds the stick moxa like a pencil and moves it back and forth along the affected channels or uses a “sparrow-pecking” motion to stimulate specific acupoints. There are both smokey and smokeless stick moxa available; traditional acupuncturists believe that smokey moxa is more effective, but many patients prefer smokeless moxa.

Needle moxibustion is another indirect form where a ball of loose moxa is placed on the handle of an acupuncture needle that is already inserted. The ball is lit using a lighter or incense stick, and as it burns, the moxa becomes tighter around the handle and generates a gentle warmth that penetrates deeply into the acupoint along the needle, gently stimulating the point further. Practitioners often place a “moxa shield” on the skin around the needle to help protect the patient’s skin from any moxa that may fall down. Typically needle moxibustion is performed on acupoints on the back because the needle must be perpendicular to the floor for optimal position of the moxa on the needle. 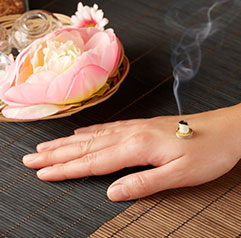